How to convert from Mbps to MB/s

One of the first tools I developed was for converting bitrates: the toolstud.io bandwidth converter. I was frustrated with having to translate ADSL bitrates (in Mbps) into the time needed to download a file of e.g. 10MB. I wanted to convert those Mbps into MB/s numbers, with Mbps = megabit per second and MB/s = megabyte per second. 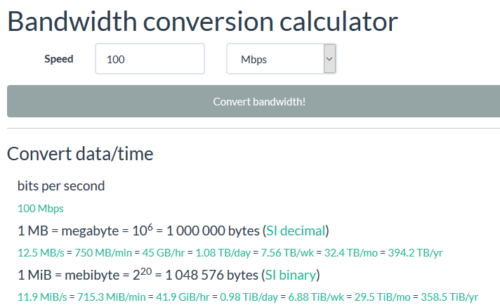 This means that -in theory- a full 💿 CD (+- 750 MB) could be transferred over a 100Mbps network connection in +- 1 minute. In practice, it would be dependent on hardware quality and the other traffic on the same connection what top speed could be reached. But always less than 750MB/min.

Another example: say that you mobile operator gives you a data limit of 10 GB/month. Is this enough to continuously stream Spotify music over it for 12 hours a day? Let’s do the calculation. 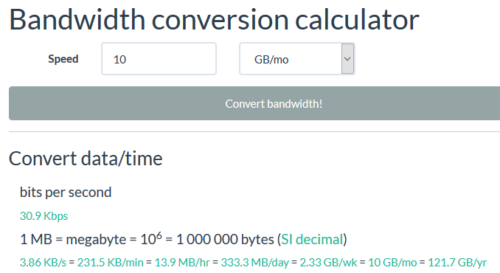 I originally was confused by some people’s usage of megabyte as 1024*1024 bytes instead of 1000*1000 bytes. This confusion was solved in 1998 when the International Electrotechnical Commission (IEC) decided that ‘mega’ would always mean 10001000. For binary units, the terms _kibibyte/mibibyte/gibibyte/…_ were proposed. Unfortunately this is not what operating systems use. You might have noticed that after formatting a 500GB hard disk, you only see a volume of e.g. 465 GB. What they mean is: 465 GiB or _gibibyte_. 465*1024*10241024. In the calculator I always use this distinction between the decimal system (‘megabyte‘) and the binary system (‘mibibyte‘).